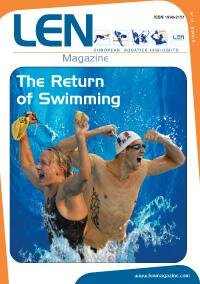 The contents of the 2010 September edition

Back to swimming
The talk was of athletes, athleticism, technique, torsos and tales fit to feed the lore of great sport ? Craig Lord?s overview.

Gaul has never had it so good

French in the fast lane

?I reacted well. I start well, I am calmer, I am in my element.? (Alain Bernard) ? ?The public pressure is a new situation for me but I think I can handle it.? (Paul Biedermann)

Allez les Bleus!
?I knew that I had the potential to achieve something.? (Yannick Agnel) ? ?And when you sweat blood for four years, it feels even better.? (Sebastian Roault)

Lacourt on Cloud Nine
?I knew I was talented but a lot of people had to help me to achieve this.? (Camille Lacourt) ? ?It?s nice to keep hold of my record but it?s there to be broken.? (Liam Tancock)

Golden awakening
?Only the Olympic title is missing from the Grand Slam.? (Daniel Gyurta) ? ?There?s a lot to learn and luckily there?s lots of time left.? (Alexander Dale Oen)

An exhausted but smiling Russian
?There are many things in my life that make me smiling.? (Yevgeny Korotyshkin) ? ?I changed my butterfly technique, I am trying to swim with longer and stronger strokes.? (Pawel Korzeniowski)

Triple double
?I?m no longer the 20 year-old László Cseh when forced to recover from a brutal training session.? (Laszlo Cseh)

While Britta was away...

Halsall & Pellegrini
?It was crazy. I thought ?wow?, I didn?t expect to be that quick...? (Francesca Halsall) ? ?Nevertheless, I am sure that starting from next season records will start to fall again.? (Federica Pellegrini)

The one Lotte
?The gold is good to have but the time is what gives me the confidence to know we?re doing the right things.? (Rebecca Adlington) ? ?The special thing is that my blood can carry an extremely high level of oxygen.? (Lotte Friis)

British empire
?We have a great rivalry and I?ve watched Gemma achieve so much but it was my turn tonight.? (Elizabeth Simmonds)

On a different level

?The difference is that this year I?ve suffered from a shoulder injury.? (Yulia Emifova)

Swedish High-Flyers
?It?s going so well for me, so why should I retire?? (Therese Alshammar) ? ?It depends what?s feeling best. If the butterfly doesn?t feel very good I can swim freestyle.? (Sarah Sjoestroem)

Cheers, leaders
?To do it against the world champion in her home pool is the stuff of dreams.? (Hannah Miley) ? ?This gold medal was also important because I proved that I?m not a shiny suit-swimmer.? (Katinka Hosszu)

?Everything went quite mechanical, coming home with a medal every day.? (Patrick Hausding) ? ?If you have sunshine or at least normal daylight the colour of the water is less dark? (Ilya Kvasha)
?From my mother I inherited the courage, from my father the strength in my legs.? (Tania Cagnotto) ? ?I enjoy life, practise other sports, such as tennis or skiing and am a family-oriented person.? (Christin Steuer)

The Russians, of course
?We cry, we say ?that?s impossible?, we start to try the new elements and all of a sudden we realise that the program fits.? (Natalia Ishchenko)

From the swimming pool...
?You don?t just need physical fitness, but also a lot of experience.? (Thomas Lurz) ? I?ve done an awful lot of hard training, and eat properly and swim between 60 and 110 kilometres a week.? (Linsy Heister)