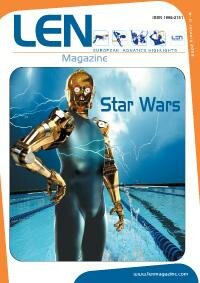 The contents of the 2009 January edition

Black suit, dark ties...
The swimmers and the scientists say: turn the clock back

WR-machine: 108 cogs
Background and analysis of the season producing 108 WRs. Is it truly amazing?


Sprint: the French Revolution
Currently, the fastest men are from France. The story of Bernard, Bousquet, Gilot and Leveaux. Who is the best?

50m vs 25m
Past and present: debate on the long course ? short course championships

Around and about
Around the pools, about the stars. The best stories of the aquatic world

All roads lead to Rome
How the financial crisis affects the preparations for this year?s World Championships

Swimming
Two men and two women in a relay? Not just fun!

Diving
Like figure skating: pairs.
Not on ice ? in water!

Open Water
The first experiences in the mixed events

Our friends
The most interesting stories from our partner magazine

Activity
Happenings around LEN plus the usual calendar

Awards
The winners and the prizes: Bernard, Sautin, Ilchenko

Best shots
The winning photos among 166 entries, voted by a secret ballot