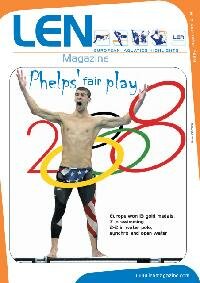 The contents of our Grand Olympic Edition - September


No.1 numbers 8
The amazing story of Phelps:
And for my next trick? Times will tell, lots of decisions ahead before Bob Bowman greets Michael Phelps home to Baltimore...

European leaders: the ladies
European swimming in the limelight in Beijing


Analysis of all aquatic events held in Beijing from a European perspective, with details on records and champions

Alain Bernard
The Bolt of swimming


Not only gold but also silver belongs to LEN Member countries

Interview with Bartolo Consolo and Nory Kruchten
The President?s farewell after 18 years in office. A relatively small sports organisation developed into one of the most prestigious in Europe

Proposals for the LEN Award 2008

From the Headquarters:
Activities and calendar

Invitation to take part in the LEN Aquatic Photo Competition

Family Pride: 51 countries, 51 heroes in Beijing (the best Olympic competitor of each LEN member country, with results and photos)
back to top  back