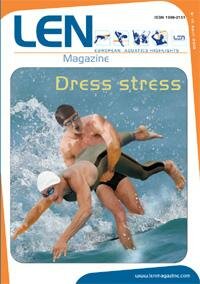 The contents of the 2010 March edition

Life in textile
Reports from France, Germany, Italy and Great Britain on how the top swimmers adjusted to the new textile era.

Can the suits return?
And how did manufacturers adjust to the new era? Our survey among suit companies shows there is still some hope of a return to the suits.

Exploding only in the water
World Champion Daniel Gyurta answers questions from LEN Magazine about his greatest year, his calmness and his unique breaststroke technique.

A swimming pearl from Dubrovnik
The childhood of Croatia?s darling, Sanja Jovanovic, was overshadowed by the bombardments of the civil war ? but she managed to leave those miserable conditions behind.

After an infamous incident at a night club in Rome, Markus Rogan decided to seek a better ending for his career.

Twenty years after
Two decades ago, the German Democratic Republic disintegrated, opening the way for investigations and confessions focussed on system atic doping of athletes.
Craig Lord assesses the sporting crime of the last century.

Eternal swimming cities
Some cities and nations are frontrunners in hosting major international events, while others distance themselves from the opportunity to welcome the world. Question marks and trends of recent years...

Give them the chance!
A delegation visited Togo under the LEN-UNICEF partnership to promote the initiative of ?safe water for every child?.

Former Olympic Champion Klaus Dibiasi reviews the dangers divers should be prepared for.


Every girls counts
Russia has enormous depth in synchronised swimming ? becoming a national team member is sometimes harder than winning a medal in an international competition.

The toughest of all

The new face of water polo
Dejan Udovicic, head coach of the World Champion Serbian team calls for radical changes in the game.

Quality took a nose dive
Not too long ago, Italy was a Paradise for foreign players and the country was a major force at all levels of the game. Today? The national teams have sunk deeper than ever and the clubs must face a deep and continuous struggle.

Heading to the new headquarters in Luxembourg.

Our friends
Contents of the partner aquatic magazines.

Teardrops on the top
Sometimes the winners cry.